There are times when you will be paddling and the ocean is like a pane of glass, reflecting a nearly identical image of the sky with the only ripples being formed by the bow of your kayak as it cuts through the water…yes it was like that, only with the addition of a Japanese Coast Guard Cutter heading straight for us. Let me give some context: throughout the expedition the Coast Guard have been very apprehensive about this journey especially because it is being done without a support boat. When we previously visited the Coast Guard HQ in Fukuoka and discussed the Okinoshima to Tsushima route they responded with the requirement for the regular 4-hour check in and support boat. When we decided to change routes to the safer Munakata to Iki route we communicated to the local Coast Guard that we would contact them but did not confirm a regular 4-hour interval. When we started our journey we contacted the local Coast Guard twice before 10:00am and informed them that the weather was excellent and we would contact them again before we arrive on Iki Island….okay, so as this boat approaches we thought maybe it’s a Coast Guard patrol to check on us because they were concerned we didn’t call. They take some pictures of us, we take some pictures of them and they informed Koji that this is a search and rescue attempt and Koji is directed to call the Coast Guard HQ in Fukuoka. Just then we hear a buzzing over head and I sarcastically remark, partly to myself because Koji is on the phone, “wouldn’t it be funny if it was a Coast Guard plane coming to find us.” As the plane straightens its trajectory I realize it is coming directly for us. Well…we didn’t expect that. 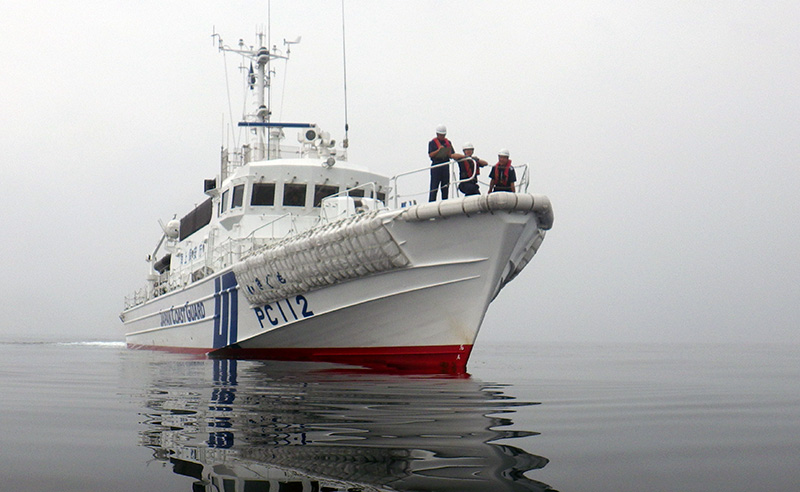 In the end, and after about 30 minutes on the phone with the Coast Guard we paddle away, frustrated and eager to finish this leg of our expedition. As we approach Iki and begin to pass its rocky coast we are put at ease as we enter a small shallow inlet of crystal blue water with our landing spot only a few hundred meters away. In total this trip was about 48.2 miles and took us a total of 12 hours and 15 minutes.

Some context on the Coast Guard Rescue: There are many factors surrounding this situation with the Coast Guard which take the form of the many calls that, both prior to and following this rescue attempt, we had made to the Coast Guard. In the end we did our best to communicate our concerns about being able to call every 4 hours and the issue with the battery life of our satellite phone to every person that we spoke to. From the Coast Guard side, they maintained a position that they wanted us to oblige to their requests for consistent communication regardless of the circumstances, similar to how a line of communication we be maintained with a commercial ship.

On a final note and my personal grudge, I had previously planned on purchasing a Delorme Satellite tracking device which would give anyone access to our GPS position at any time, anywhere in the world. It would enable the Coast Guard to look at our location as many times as they pleased but because of some licensing issues with the major Cell Phone Service Providers in Japan and the Iridium satellite network, they made this technology illegal unless you get a “special” permit. The ironic thing was that we actually talked to the Coast Guard about this device and they were completely oblivious to its existence and unaware of its capabilities but stated that they would have to confiscate it if they found it on our boat, according to Japanese law.