At this point we have little chance of getting into Korea as confirmed by both the Customs and Immigration offices in Busan, Korea. Although, there are still is a slim possibility that something will happen, I’ve nearly given up hope. Meanwhile, we are still waiting for the Typhoon to make landfall and eventually pass so we can think about getting back into the ocean. We are also getting a tour of Tsushima island compliments of Wakimoto San, who is showing us around between deliveries (he makes bento or lunch boxes). As we are heading South on Tsushima towards the beach we would have landed if we traveled via the Tsushima/Okinoshima route so we decide to stop and check it out. As we are standing under a pavilion I notice some people swimming and a man who is talking to a local about a rock he found in the water. He was intrigued with the fact that it looked like a rock and felt like a rock but it was floating. Realizing this man was from Korea, Wakimoto San suggested we talk to the man about our desire to get into Korea. Koji begin to talk to the man about the rock and confirmed it was a piece of concrete with a Styrofoam core. Continuing the conversation, he mentioning our desire enter Korea and the current problems we are facing. As Koji was talking the man began to take notes and ask questions about our desired dates of entry. I found this slightly odd, but without thinking much of it I too, began to talk about our past year of beach cleaning efforts and our desire to unite Korea and Japan with this expedition. The man seemed intrigued and said he would do his best to help. He gave us his card, which said “The Lion Hearted.” 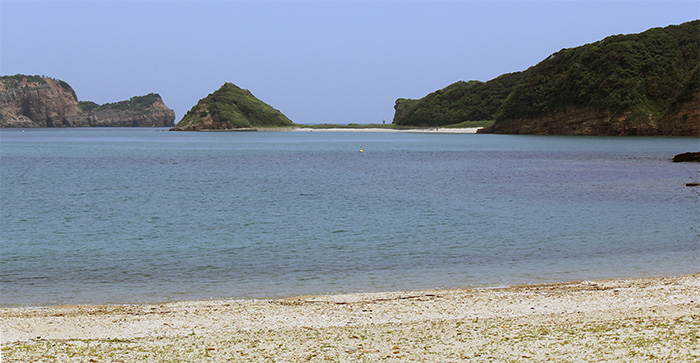